Herringbone Stitch is made up of a series of parallel diagonal lines that cross at the top and bottom. As the name suggests, it resembles a row of crossed fishbones. This simple stitch is easy to learn and versatile in use. There are numerous variations beyond the basic stitch – several of the most popular are covered in this tutorial.

Herringbone stitch is worked from left to right. Start by marking two parallel lines a short distance from each other. For this example, the marked lines are 3/8″ apart. While I find this to be a good distance of measurement for practice, herringbone is easily adaptable to longer or shorter stitches.

Starting on the right side of the line, make the first stitch from top to bottom at a diagonal slant.

Bring the needle back up at point C, a short distance from where the last stitch ended (point B) and make another diagonal line up to point D.

The third stitch starts at the top (point E) and makes another diagonal line down to point F. Note that the lines from A to B and E to F are parallel to each other and the diagonal angles match.

While there are no set rules for the angle of the stitches or the distance between lines, it can be useful to have some guidelines to follow when learning a new stitch.

Following the above guidelines, continue stitching until you reach the end of the line.

While herringbone stitch is most often used a border, it can also be stitched in rows and used to fill shapes. Simply draw several parallel lines and stitch the rows on top of each other.

There are many variations of the basic herringbone stitch. One of the easiest is tied or tacked herringbone. This variation can be made using the same color, or a contrasting color thread.

Start with a line of herringbone and bring the needle up next to the first spot where two threads cross. Come back down on the other side to complete a small horizontal stitch. Continue adding small stitches to all the areas where the lines of thread cross.

Take this variation one step farther by adding an additional vertical stitch to make a t-shape.

Another easy yet eye catching variation is called threaded herringbone. This one looks best with a contrasting color thread.

Once again, start with a row of basic herringbone. Bring a needle and contrasting color thread up at the start of the line of stitches. Without going through fabric, thread the needle under the first stitch from right to left.

Twist the thread over the top of the first crossed section, then back under the next diagonal stitch. Be careful not to pull too tight.

Continue weaving under the diagonal lines and over the crossed sections, until you reach the end of the line. End the threading by bringing the needle down and through the fabric at the bottom of the last herringbone stitch.

This variation creates a twisted version of the herringbone stitch. It can be easily modified with longer or shorter stitches, and looks nice stitched around curves or in a circle.

Start with a single diagonal stitch from point A to B. Bring the needle back up at point C like you would for the traditional herringbone stitch. Instead of making another diagonal stitch, pass the thread under the first stitch from right to left without going through the fabric.

Pull the thread tight to create a twist.

Bring the needle back down at point D. Repeat these steps for the next stitch. Starting at point E, make a stitch up to point F, come back out at point G, and pass the needle under the stitch before pulling it tight to create the twist.

Continue following this stitching pattern until you reach the end of the line.

Looking for a project to put your newfound stitching skills to use? The Apple Baskets Embroidery Pattern features piles of shiny red apples spilling out of two baskets beautifully decorated with herringbone stitch. Using both the basic stitch along with the twisted and tacked versions, this is a great pattern for practicing and mastering herringbone stitch.

Woven filling stitch is an excellent way to fill shapes while adding texture, interest, and... 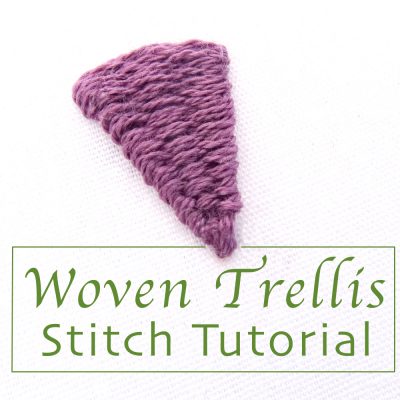 Blanket stitch is already known as a simple, versatile embroidery stitch used for everything from... 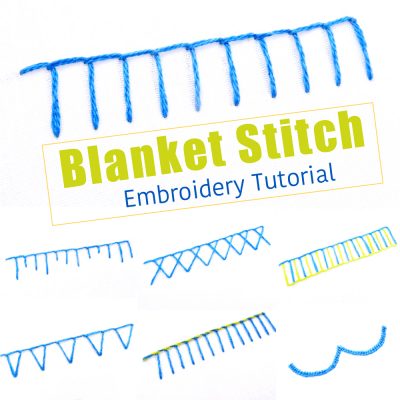 Blanket stitch may have traditionally been used to finish the edge of blankets, but the... 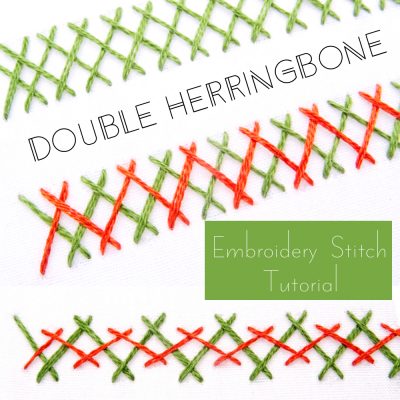 If you like Herringbone stitch, then you will love Double Herringbone. It’s twice as much... 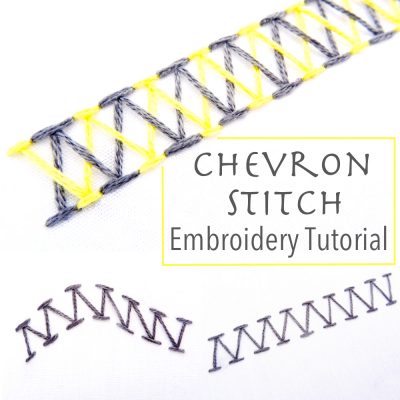 With its unique zig zag pattern, Chevron Stitch makes beautiful borders and outlines. It can... 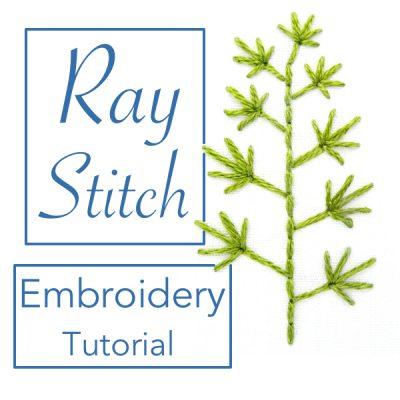 Ray stitch is one of those simple stitches that creates amazing results. Also known as... 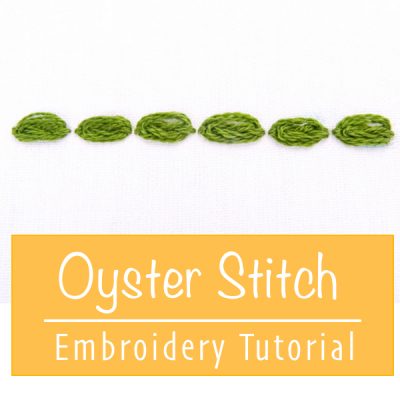 Oyster Stitch is a detached type of chain stitch that creates a compact, oval shape...

This site uses Akismet to reduce spam. Learn how your comment data is processed. 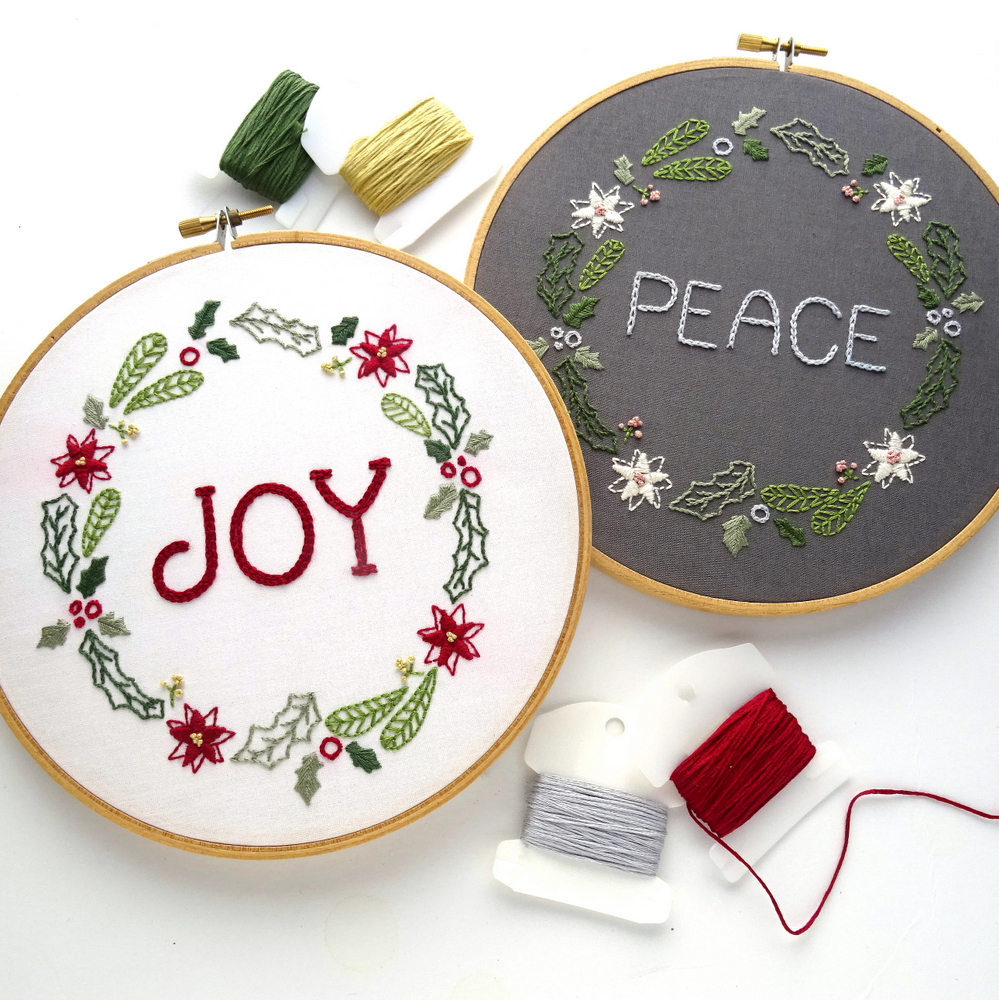